I loaded the car up yesterday to run some errands and take little J for her well child check. It was a rainy, dreary day. As I was coming down the driveway, I spotted the flock of turkeys who like hanging on the hill. Since it was raining, they weren't terribly fast and didn't fly off into the woods. I stopped and put my window down for a picture. I counted 14 and some scurried away before I could snap the picture. 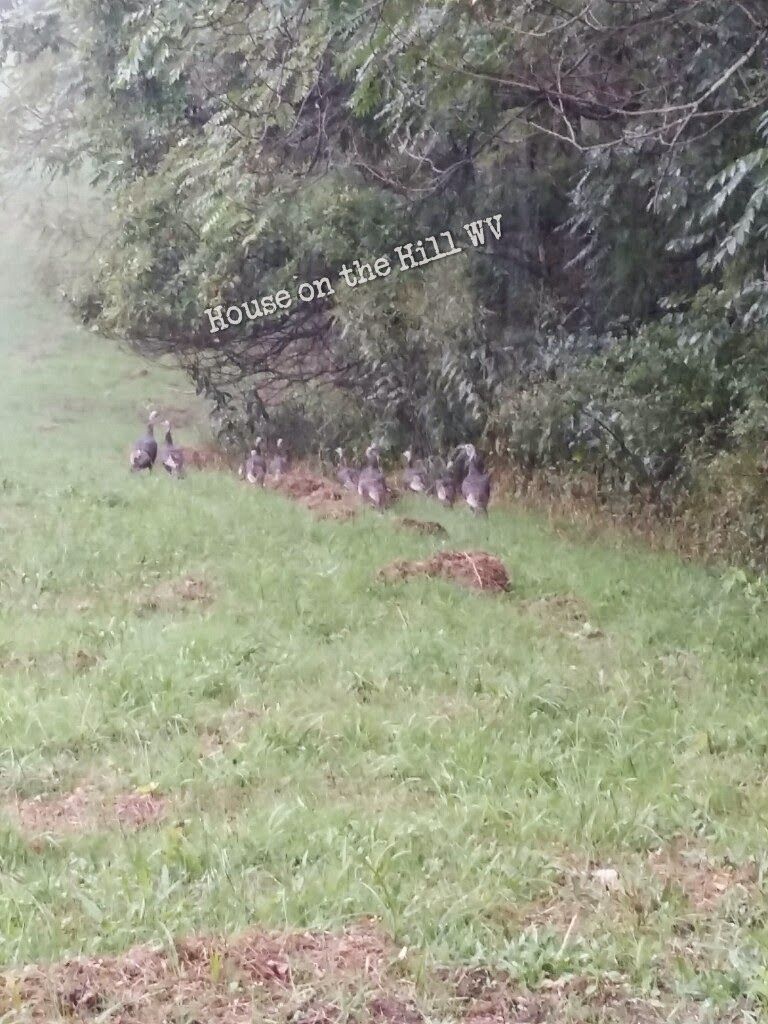 Great, I thought. I had a picture of the turkeys who start every spring in a nest behind the house. When I put the window down, it made a funny sound but I didn't think too much of it. Until I couldn't get the window to come back up. It was pouring down rain, remember?

I turned around and got back to the house. I pounded on the door a little. No dice. I turned the car on and off several times. Still no go. I searched Google for ideas of what might be wrong. Most of it went over my head. I was still hoping that if I let it sit for a few minutes and turned the car back on, it would magically work again. I called the local Honda dealer. I was told it was a common issue and would be a nearly $500 fix. Fantastic.

But, remember how we built our own house. Well, by we I mean my hubs and dad. Dan also do 99% of our vehicle maintenance. So, when he got home, he pulled the door apart and found the problem. The dealer was right in the over the phone diagnosis. But, we won't pay $500! We won't!

Dan went off to search the internet and found the part at a few places. Meanwhile, I am semi-freaking out. The Mother Earth News Fair is this weekend and I have plans for 2, maybe 3 people to ride with me on Sunday to attend. There is no way I will miss it! None! But, the part isn't available anywhere until the start of next week. Oh nuts, as my little man says.

Dan ordered the part and I began looking into rental cars. Driving over two hours without a drivers side car window ain't happening. Hertz has an affordable weekend rental rate and so my friends and I will be riding in style in a compact car. At least it should get good gas mileage!

PS - We looked into junkyards, but to no avail.
Posted by Unknown at 9:38 PM