So, Kole had a little bit of a breakdown last night.  He has been giving us issues the last few weeks with going to bed.  He tells us bed is "bad", but has never given us a reason why.  Until last night.

He said he didn't want to go to sleep because sleep is bad.  When I questioned him further, he just said sleep was "very bad for you."  I asked him if something scared him in his dreams.  He responded with a resounding "yes!" and proceeded to tell us that he thinks there are monsters in the trees behind our house and they come in to scare him.

So, last night he and Dan took his play gun to scare the monsters away.  We also put his stuffed sheep closer to his window to scare away any monsters that might come in through the night.  And I told him that we would go get curtains for his windows.

This morning I posed a question on Facebook to see if any other moms out there had a similar experience.  One friend told me that she had a family member who struggled with the same thing with her daughter.  She had air freshener that they decorated as "monster spray" and sprayed it at night before bed wherever the daughter thought monsters lived.  Another friend said she actually bought her daughter some spray at Wal-Mart called "Monster Spray."

Soooo....while I thought that was an excellent idea, I didn't like the idea of spraying air freshener every night.  Cue Google!  I figured I could simply put some essential oil and water in a spray bottle and wa-la!  Monster spray.  And that's exactly what we did.  We used lavender essential oil.  I feel that this will not only help Kole feel better about the monsters, but will also add some calming benefit for sleeping :-)

After we made it this afternoon, he went outside to spray it and yell at the monsters.  Here's hoping we have a better night!

Tomorrow I'll share my curtain project!
Posted by Unknown at 8:17 PM No comments: 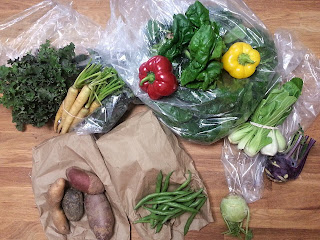 Now, what to do with all of this yummy food?  Tonight was salad with spinach, pepper, and carrot!  Off to look for kohrabi recipes....
Posted by Unknown at 9:08 PM No comments: 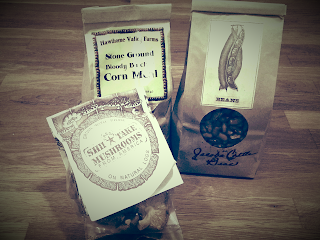 One of the things that I adore about the local food movement is the number of Farmers Markets.  We are weekly visitors of the Bridgeport Farmers Market during the summer and I love that they also put on winter markets.  There are a lot of local farmers who utilize greenhouses and hoop houses, so it is not unheard of and quite common, actually, to be able to get salad greens and other root vegetables all the way through the winter.

Today, we were able to get tomatoes and basil, which we used to make sauce for lasagna.  We also got beef stew meat, Italian sausage, lamb stew meat, and picked up our turkey for Thanksgiving.  We got a 20 pound turkey - we are having Dan's family in from Georgia, so we are looking forward to enjoying the bird!

We also got some things for our pantry.  I picked up some bloody butcher cornmeal, Jacob's Cattle beans, and dried shiitake mushrooms.  Liz, from Hawthorne Valley Farms, said that the bloody butcher cornmeal is a bit sweeter than regular yellow cornmeal.  I want to try to make it with some cheese for Kole.  The Jacob's Cattle beans are an heirloom variety and I'm anxious to use them in a baked bean dish.  She gave us a recipe for "apple cider beans", which sounds quite delicious.  And lastly, we got some dried shiitake mushrooms.  They are really good in soup and we enjoyed them last winter with our CSA.  These pantry items make me feel better about going into winter as well!

Tomorrow is our first delivery for our winter CSA - I'll post pictures tomorrow!!  :-)
Posted by Unknown at 6:42 PM No comments:

Last Thursday, during a beautiful afternoon, we lost our power and phone/internet.  Ever since the derecho storms over the summer, we periodically lose our power.  It can be quite frustrating at times, especially when it happens on a beautiful sunny day with no wind.  We were fortunate to get our power back later that day, but we were without our phone/internet until Tuesday night.

On Monday morning, we lost power again.  We were fully prepared, at least mentally, to be without power for a few days with Sandy's arrival.  We were not thrilled, however, when the power cut out before it even started raining.  We were incredibly lucky in that the power was restored after lunch.  Dan had come home in the morning because he forgot his laptop at home.  I am so glad he made it home because we needed to light our woodstove.  The first burning of the woodstove can cause some smoke to come off as the paint heats up.  Needless to say, we had to remove Kole's smoke detector from his bedroom for a while because it kept going off.  The detector ten feet from the stove was fine, though!

On Tuesday, Dan was able to work from home as his office was closed to regular, non-emergency employees.  We woke up to about 3 inches of snow, which was quite fun to see!  The woodstove was roaring, Kole and I played, and Dan worked.  They took a brief break in the afternoon to go outside to make snowmen.  Kole really, really enjoyed that.  And we found our phone had returned that evening!  Kole was thrilled as he loves watching Netflix.  I don't like for him to watch it all that much, but it is a real lifesaver when pregnant to help keep a little boy occupied!

My mom and step-dad got hit a lot harder with the storm, receiving roughly a foot of snow.  There were numerous trees down on their road.  They hope to have power restored this weekend, but that's still up in the air.

With the storms this summer and now Sandy, it has really made us realize that a nice addition to our homestead would be a backup generator.  We borrowed my dad's over the summer and we used it for a little while Monday morning, but we hope to be able to get one that we can hook the whole house up to.  We love the woodstove, so we don't have to rely on electricity to heat things up!

It has also deepened our resolve to become as self-sufficient as possible.  We won't have to worry about food during a power outage if we have a stocked pantry with home canned goods, a root cellar with vegetables, a freezer full of homegrown meat, and some dairy animals for milk.  It simply makes sense to us :-)