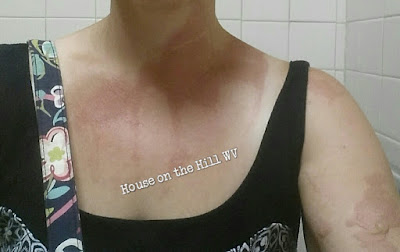 What's on the Needles - Sept 7

It's back! I'm starting back up my weekly "What's on the Needles" posts! Knitting really helps keep me centered and the benefits of knitting are numerous. Sharing with you helps me even more!

I've really grown to enjoy knitting socks. I used to collect toe socks as a teen (are those still a thing?!), so I think my adoration has been longstanding. I really like the way these self striping yarns knit up. I recently finished one sock and am going to cast on the second this afternoon. 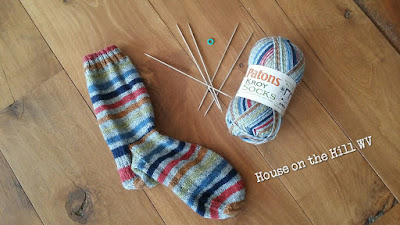 What's on your needles?

Happy Labor Day! I don't know about where you live, but the weather here today made it seem more like the 4th of July than Labor Day. We took advantage of somewhat cooler temperatures this morning to get out to the garden.

After reading Mother of a Hubbard and seeing all of Kathy's success with her eastern Kentucky winter garden, I've been itching to try my hand at it. Two weeks ago, we planted some beets and peas. The peas are starting to come up nicely. From what I've read, fall peas are far superior to spring planted ones, so time will tell! 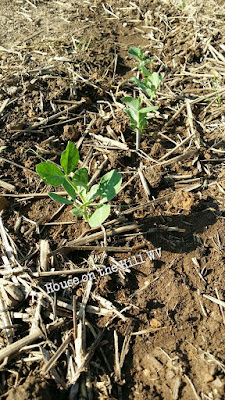 I got some kale, spinach, swiss chard, and lettuce in the ground. I hope to do some succession planting of the lettuce and perhaps purchase some corn salad to plant in a few weeks. I also will be ordering our row cover this week. Despite the forecasted high of 96 tomorrow, cold weather will be here before we know it! 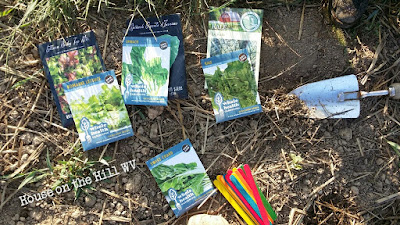 We also need rain - badly! We have 6 rain barrels and they are pretty much empty. We were able to set up our soaker hoses, so that will help out in keeping the newly planted seeds moist and ready to germinate. 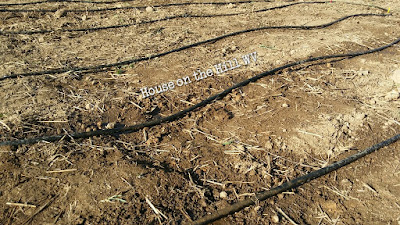 Every time I go to the garden, I am accompanied by Chip. He slithers in through the fence. After the planting was done and the soaker hoses connected, I sat down for a minute to rest and watch the hoses do their thing. Chip decided it was prime time for some cuddling, and so we sat and enjoyed some quiet time alone. A rare occurrence around here! 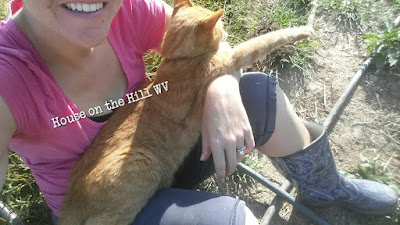 How about you? Are you trying your hand at a fall or winter garden?
Posted by Unknown at 7:55 PM No comments:

The last two years, our tomato harvests have been pretty abysmal. Our first year, the wacky weather killed off a lot of our plants. Last year, without the fence, the chickens annihilated any chance of tomatoes. So, this year! This year! With remineralizing our soil (yes, I know, I need to dedicate a post to that!), our garden has been doing awesome. That and the fence.

Since we love tomatoes and tomato products through the winter, I came into this summer prepared. I started some of my own plants and bought other heirloom varieties from a farmer friend. All in all, we started the summer with 2 dozen tomato plants. Cherokee Purple, Mortgage Lifter, Bonny's Best, Pineapple, Black Krim, German Johnson, Amish Paste, Italian Heirloom, Stupice, Gold Medal, San Marzano, Sun Gold, and Black Cherry have all outdone themselves this year.

While I haven't been weighing each harvest to keep track, I do know we used 48 pounds for barbeque sauce and ketchup. We have 12 quart bags frozen of roasted tomato sauce and 14 jars of plain tomato sauce canned. We like to keep things plain around here so we can spice them up when we use them this winter. Our plants show no signs of stopping and I'd guess we've harvested at least 300 pounds. 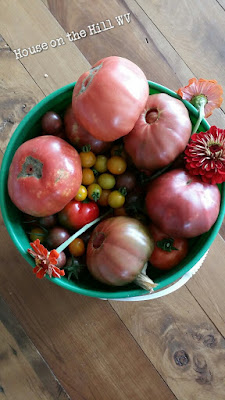 We've also harvested 100 pounds of potatoes, 3 pumpkins, 18 Delicata squash, and we could actually grow decent carrots this year! How did YOUR garden do?